How I Came to Love an Alien

By Kenneth Ring, Ph.D.
He had still been a sailor when he met my mother, but he took to her right away, and she, desperate for the security of a stable relationship after my father Phil’s long absence and years of unfaithfulness, succumbed to this young, vigorous and enthusiastic he-man. Indeed, Ray Ring was a muscled, tattooed bull of a man, still in his mid-twenties and full of life. To me, however, it was as if an alien creature had suddenly burst into our house with a kind of demonic energy and taken over the lives of my mother and me. I had, without any warning, acquired a stepfather and lost my own father forever at the same time.
Before Ray’s entrance into our lives, my mother and I had continued to live with my aunt, uncle and cousin in a fairly roomy house in Oakland where I had in fact grown up. I didn’t understand then that it was my uncle George who must have been supporting us since my mother never worked, and that it must have been something of a financial burden to him to have to provide for two families, especially since he was the only breadwinner. Years afterward, my aunt told me that she had seen that it was necessary to induce my still-shy mother to go to service clubs in order to meet eligible men looking to get married, and that’s how Ray had met her and where he began to court her in what must have been an ardent fashion for he certainly did love her with great passion in those early years.
In any event, as soon as my mother and stepfather were married in July of 1946—I was now ten—the three of us moved into a very tiny down-at-the-heels dwelling in a depilated court in the same general area where I had grown up near Mills College in Oakland. Another life was beginning for all of us, and the deep bond that had grown up between my mother and me during the war years was sundered at this time by this strange intruder, my stepfather, who was so unlike all the other members of my own family. 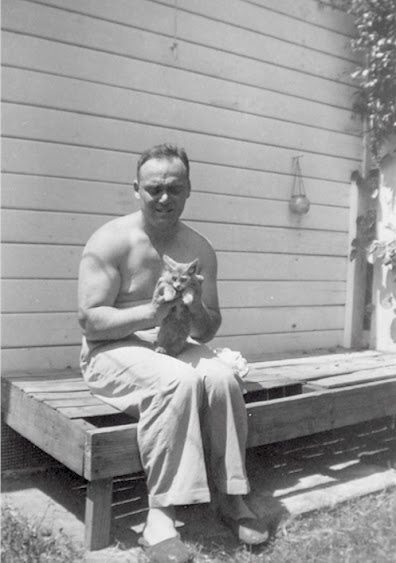