How It All Began

One evening in November, 1977, I was in my kitchen stirring some cream sauce when the phone rang. Still stirring the pot with my left hand, I reached across for the phone and heard an unfamiliar voice on the line speaking with a southern accent.

"Hello, Ken?  This is Raymond Moody."

I stopped stirring my cream sauce.

Raymond wanted to invite me down to Charlottesville, Virginia, where he then lived, along with several other researchers whom he had heard were following up on his work, and someone had drawn his attention to me. That someone – a sociologist colleague of Moody’s named John Audette – would soon be in touch about the arrangements, but meanwhile Raymond was hoping I could come down.

At that time, I was living near the University of Connecticut, where I then taught, with a former student of mine, Sue Palmer, and my daughter, Kathryn. Sue was one of the persons who had been of inestimable help to me in carrying out my first NDE research project, which would eventuate in my book, Life at Death, which I published in 1980, and is now recognized as the first major scientific investigation of NDEs.

Sue also was keen to go, so in short order, we loaded up my car and headed down to Virginia where I would meet not only Raymond, but several other professionals who were to play key pioneering roles in the development of the field of near-death studies – in particular, Bruce Greyson, Michael Sabom, and John Audette, all of whom were to become close colleagues of mine. Everything of importance really began from that first meeting.

Here’s a photo of “the four amigos” who met the next year at a conference and were soon to create The International Association for Near-Death Studies [see below]. That’s me on the left with John Audette hovering above me. Bruce is in the middle and on the right is Mike Sabom. 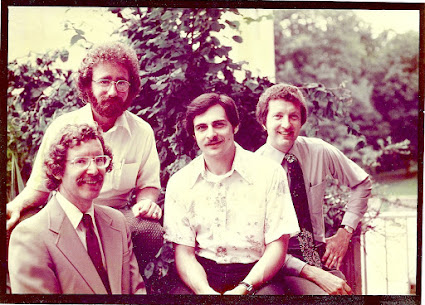 But here I want to focus my attention on Bruce Greyson for reasons that will soon become evident.

I have a vivid memory of when I first met Bruce. It was November 19, 1977, at the University of Virginia, where we had all gathered to meet Raymond Moody. Raymond whose little book, Life After Life, had by then to his surprise become a huge best seller, had been inundated with mail and had had to interrupt his medical training. He was eager to pass on the torch to some of us so he could finish his residency and become a practicing psychiatrist. I was in my early 40s; I think Bruce was about 36, and he was a stud then, dark-haired and handsome. As it turned out, Bruce and I really connected at that meeting, and together with John Audette, we went on to establish The International  Association for Near-Death Studies (IANDS) a few years later – actually, exactly 40 years ago.

Once IANDS had been situated at the University of Connecticut early in 1981, I founded and edited an NDE journal, which then had the unfortunate and forgettable name of Anabiosis. But by the next year, I was due for a sabbatical during which I wanted to finish my book, Heading Toward Omega, so I asked Bruce if he would be willing to edit the journal while I worked on my book.

He was, and continued to do so for the next twenty-five years! If any of you have ever edited a journal, you know what a selfless and time-consuming task it is. You had to be willing to sacrifice your own career in order to enable other professionals to publish their own works. That’s the kind of person Bruce was and is. Totally dedicated. And while all of us in that original group eventually moved away from involvement with IANDS, only Bruce has remained faithful to it to this day. In my opinion, no one has done more to bring professional recognition to the field of near-death studies than Bruce. I have long held the view that his contributions to the field over more than forty years – his editorship of The Journal of Near-Death Studies, his many excellent and important research studies, the books he has co-edited containing his own articles, all the public lectures he has given, his service to NDErs as a master therapist, and so much more – mean that Bruce is without doubt the most important and influential professional in NDE studies.

That’s one reason I wanted to tell you about Bruce whose name may not be as familiar to you as that of some of the original pioneers whose work set the stage for the study of NDEs, such as Elisabeth Kübler-Ross and Moody himself, who coined the expression, "near-death experiences." But soon Bruce will at long last gain the widespread recognition he deserves. I will get to that – the second reason I wanted to write this blog.

When we met, Bruce was working as a psychiatrist at the University of Virginia where his specialty was working with suicidal patients. When he had started his career there a year earlier, he knew nothing about NDEs. Indeed, he had never heard of them, and if he had, he would have dismissed them as hallucinations. Bruce had a strong skeptical bent, and was not religious or interested in spiritual matters. That was all to change, of course, and I will now tell you just how that happened.

One day Bruce was in the cafeteria munching his spaghetti lunch when his pager went off. The sound startled him, causing him to drop his fork and to splatter some spaghetti sauce on his tie. Peeved, he tried to remove the stain, but in vain. He would have to clean it later. Meanwhile, he found out that a patient had tried to kill herself and her roommate was waiting in the ER to speak to him.

Bruce first went to the patient’s room to examine her. Her name was Holly and she was unconscious, so Bruce could not speak with her at the time. A staff member who had been placed there for security purposes assured Bruce that Holly "had been out the whole time." Bruce would have to return the next day when she presumably would be conscious again. In the meantime, he would seek out Holly’s roommate, Susan. Bruce interviewed her extensively that evening.

When he returned the next day to examine Holly, she said to him, "I know who you are. I remember you from yesterday."

Bruce knew this was impossible. Holly was unconscious at the time. But Holly went on to explain, "Not in my room. I saw you talking with Susan, sitting on the couch."

Bruce said, "The staff told you I spoke with Susan last night?"

And then the clincher: "You were wearing a striped tie that had a red stain on it."

“What?” Bruce was completely flummoxed by what Holly had told him. It was impossible.

But Holly then repeated what she had told him and went on to give an account of the conversation Bruce had had with her roommate, mentioning all his questions and Susan’s answers. Holly also recounted Susan’s pacing and Bruce’s moving a fan during his interview. All this was correct. How could Holly have seen this? Bruce’s skeptical boggle threshold went through the roof.

Bruce remembers that "the hair rose on the back of my neck and I felt goosebumps. She couldn’t have possibly known all that."

The puzzled and skeptical psychiatrist couldn’t explain it but he couldn’t accept it either. He figured it must have been some kind of a trick. He tried to put it out of his mind. Just one of those weird things out of "The Twilight Zone."

But Providence intervened. Not long afterward, Bruce encountered a psychiatry resident by the name of Raymond Moody and learned about Moody’s book, Life After Life. And a bell went off in Bruce’s head. So Holly’s experience, as inexplicable as it seemed to be, was not that unusual. Raymond had discussed a number of such cases in his book. Bruce wasn’t hooked right away – he was still skeptical – but he was intrigued. And as the years passed, he was more than intrigued. He became the foremost NDE researcher of his time who did more than anyone else to establish that the NDE was an authentic phenomenon and that it deserved serious attention from scholars and professionals.

Bruce and I came to spend some years together at UCONN when he was at the medical school there while I was in the psychology department. I got to know him well then, and we had so much fun, too, especially when we would have time for a long lunch together after one of his presentations to my NDE class. It was during that time that I came to love Bruce as a brother. This photo will perhaps give you a sense of our closeness and camaraderie. 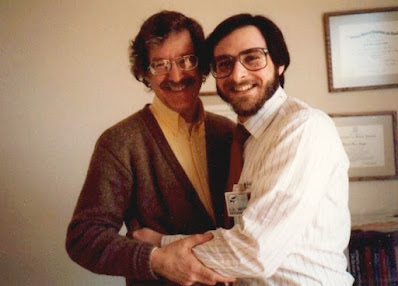 Which brings me at last to the second reason I wanted to write about Bruce here. And that is to tell you about the book he has just written, which describes in very accessible language the work he has done over the past 45 years to help us understand how experiences like Holly’s could happen. He has given his book an unusual title, After. As he explains, the title doesn’t just refer to what might happen after death or what happens after NDEs, but what might happen after you read his book. Rilke famously said, "You must change your life." Reading this book might change yours. 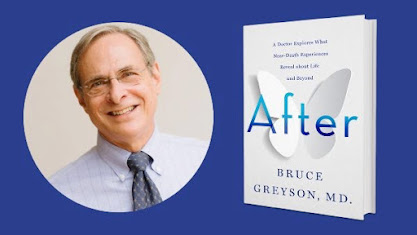 I’ve just read it, and it is humdinger. For anyone interested in NDEs, it is essential reading, and is surely destined to become a classic. Perhaps what I’ve already written will encourage you to buy it, but if I haven’t already persuaded you to do so, perhaps my "blurb" for the book will:

In After, psychiatrist Bruce Greyson tells the story of his personal and professional journey from a skeptical scientist to his becoming the most distinguished and important authority of near-death experiences in the field. Drawing on his treasury of forty-five years of research, and studding his account with fascinating cases, Greyson provides an always engrossing and illuminating survey of the basic findings and implications of NDE studies for the general reader. In his book, he shows us why he is regarded as the leading expert to put NDE studies on the map and establish it as a legitimate scientific enterprise. Moreover, he is not afraid to share his insights on spiritual issues that NDE research affords, including the possibility that death isn’t a dead end. Both inspiring and deeply personal, this is a book to savor and the culmination and capstone of Greyson’s outstanding career.