A Half Day in the Life

Many times during the day I look out my wide office window to the street beyond my court where I see many young people, and some not so young anymore, striding along or sometimes riding their bikes with the wind at their backs. I look with envy because I can no longer walk. Well, I can, but not without difficulty. What I can do is trudge, but even then I can only make it partway down my street. And even to do that, I have to stop once or twice to catch my breath before continuing on my solitary way before pausing for a few minutes, and then starting my return trip.

I usually have to walk bent over, my eyes seemingly searching for centipedes, which has sometimes resulted in my failure to see an oncoming cyclist who has suddenly emerged from the gloom, forcing me to step aside quickly and not lose my balance in the effort to avoid a bone-shattering collision. The hazards of the trail. 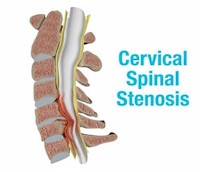 Spinal stenosis. I don’t recommend it. It’s like walking with cement blocks on one’s feet – uphill.

Sometimes when I stop to catch my breath and curse my fate, a kindly roadrunner will halt and say, “You okay there, buddy?” “Nothing that a new spine wouldn’t fix,” I retort.  “Do you happen to have one?” A chuckle. He resumes his run, I resume my tottering, usually stopping once more before entering my court and congratulating myself on another successful mission on my rounds to nowhere.

But actually I am going somewhere. All this was just a prelude to my real mission, which is to re-enter my house and find my way through the winter darkness of my garage to my storage room. There, my gleaming stationary bike awaits my sorry ass. Frankly, it is the only bike I have been ever been able to ride. As a kid I had a very poor sense of balance owing to a congenital nystagmus and dreadful vision. Nevertheless, on my ninth birthday, I was given a shiny new bike. Taking it down a nearby street, a flat straightaway that typically had little traffic, I found a truck heading my way. I lost both my nerve and my balance, and swerved right in front of it. Obviously, I survived, but I immediately decided that in the interest of preserving my still young life, I should relinquish my cycling ambitions forthwith. I have been walking ever since, though not continuously of course, if no longer well, as you now know. 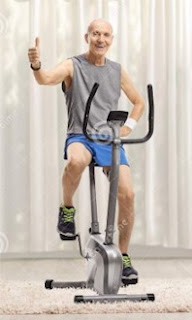 Anyway, I am now a veteran stationary bike rider and have been pedaling my little legs off for years, although I find that they are still attached, which is a good thing. But what isn’t good is my current performance. Consider the trend line:

A couple of years ago, I could still easily do 30 minutes with an average of speed close to 6.O and burn off more than 300 calories. These days I start out at a good speed but by the time I do 20 minutes of pedaling (which is my limit now), my speed is barely above 5.0. Even a few months ago, I could still get up to 5.4, but lately I am lucky to reach 5.2, and usually it is no better than a shocking 5.O or even (gasp) 4.9. And that’s with “pushing” hard, too. My calorie count has plummeted as well, naturally, and is now only a little more than 200.

At this rate, I will soon be able to give new meaning to the term, “stationary bike,” as I approach a stationary state myself, like one of those human statues one sees along the Ramblas of Barcelona.

Yes, I rambled down the Las Ramblas back in the day when walking was a pleasure, not a trial, making sure to keep my left hand in close proximity to my wallet-filled left trouser pocket lest one of the many pickpockets who were plentiful among the human non-statues thereabouts not find their way into the region of my loins. And in Barcelona where at any time of the night or day the streets are thronged with young revelers and elderly tourists – or sometimes middle-aged ones like my lover of the time and me – walking mile after mile was de rigueur. Oh, those were the days when I was happy to promenade down the noisy boulevards of that fabled revolutionary Catalan citadel, a would-be flâneur taking in the sights while sometimes stealing a glance at the young beauties gaily coming my way, singing.

If it’s a bad idea to change horses in mid-stream, is it also inadvisable to change directions in an essay mid-way through? Well, who cares? I’m gonna do it, anyway, and I’ll tell you why. 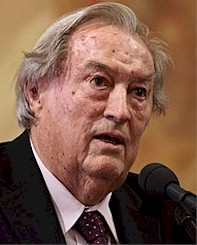 You’re probably familiar with the name. He’s one of the great paleoanthropologists of our time, still another member of the famous Leakey family beginning with his father, Louis, and his mother, Mary. Richard died the day after New Year’s Day this year, and I just read a short tribute to him in which I learned some important things, not only about his work, which is well known, but his physical hardships, which are not. I learned, for example, that he survived two kidney transplants, a liver transplant and a plane crash that resulted in the amputation of both of his legs. What a series of incredible agonies he must have suffered and yet, from what I read, he was uncomplaining. He just carried on. Even in the few months just before his death when suffering from COVID and having trouble breathing, he gave, while sitting in a wheelchair, an inspired 45-minute talk.

What a guy, eh? How many people could have endured such serious operations only to emerge after recovering to continue their work without whinging about them and their condition?

Yet here I am complaining about not being able to walk well. Honestly, Ken, you think you’ve got troubles? Don’t you realize how lucky you’ve been to have had the life you had – and still do? Besides, who wants to listen to old men recount all their infirmities? How tedious, especially in light of a two-year-long pandemic that now, suddenly, seems to be raging out of control, and is apparently so dire as to cause the director of the FDA to warn that it’s likely everyone, sooner or later, will get COVID. Well, pardon my French, but fuck that!

Anyway, after considering Leakey’s story and the dark winter we are living – and dying – through, it does put things in perspective, doesn’t it?

So what if I am now a reluctant member of the species, Homo patheticus? After all, I wasn’t always such a pitiable sight as I try to make my way down the street. Until relatively recently and for the great part of my life, I’ve been able to travel widely, I’ve had a successful and very rewarding career, I’ve written a bunch of books, fathered three wonderful and talented children, had quite a few amorous affairs and, when I wasn’t preoccupied with them, managed to acquire four or five wives, depending on how you count them. Truly, I have had a blessed – and lucky – life. 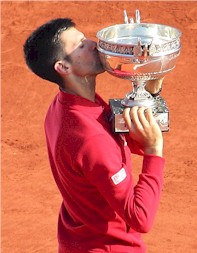 And even today, I am blessed with a loving girlfriend, a caretaker who is an absolute gem, and very kind neighbors who are always offering to do me favors. Plus, friends who I know love me, and devoted children (and grandchildren). Count your blessings, Ken, and quit griping about your trivial bodily trials. Why don’t you just confine your bellyaching to the fact that apparently the Australian authorities are going to permit Novak Djokovic to defend his title at the forthcoming Australian Open [or perhaps not according to the latest news bulletin from down under] despite his lying about his application for his visa and his refusal to get vaccinated like the rest of his competitors. (Can you tell I am still a diehard Federer fan even though that champion’s career is now effectively over because of persisting knee problems. You don’t hear Federer complaining about his fate either, Ken, do you?)

And guess what? Yesterday afternoon, after beginning this essay, I went out to exercise and had the best workout I’ve had in months. I was able to walk all the way down the block without difficulty or having to stop, and ditto on the way back. A complete rarity. Not only that, but when I got on my bike, I was able to pedal vigorously without “pushing,” and had an absolutely splendid workout. My speed was at an all-time recent high of 5.6. It was like I was the old Ken. Well, of course I’m still an old Ken, but you know what I mean.

To coin an original phrase, what a difference a day makes.

Well, even if I don’t die of COVID, I surely will die during the age of COVID, but I have a new goal now. Some of you who may be familiar with my book, Waiting to Die, may remember that some years ago, it was my goal to reach 1000 months before dying. Well, hell’s bells, I already shot well past that mark and am now into my second thousand month cycle. But my new goal is to survive this year. If I can manage that, I will be 87, and will then be the longest-lived male member of my family. I’m going for it, and right now I am getting ready to get back on my horse, figuratively speaking, to get out to exercise. Wish me luck today – and also for my new goal to set a longevity record in my family! This ancient mariner (I live in Marin county) is off to the races…

Postscript: My workout today was just as good as yesterday’s, even a tad better. I’m on a roll. Watch me, ma. 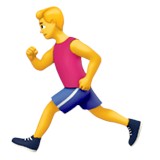 That blur you see is me!

Note: That old gent pictured on the stationary bike isn’t me. I’m not nearly so ancient-looking as that fellow!