The Rose That Failed to Bloom: Memories of My Mother

The Withering of the Rose

He had still been a sailor when he met my mother, but he took to her right away, and she, desperate for the security of a stable relationship after my father’s long absence and years of unfaithfulness, succumbed to this young, vigorous and enthusiastic he-man. Indeed, Ray Ring was a muscled, tattooed bull of a man, still in his mid-twenties and full of life. To me, however, it was as if an alien creature had suddenly burst into our house with a kind of demonic energy and taken over the lives of my mother and me. I had, without any warning, acquired a stepfather and lost my own father forever at the same time.

Before Ray’s entrance into our lives, my mother and I had continued to live with my aunt, uncle and cousin in a fairly roomy house in Oakland where I had in fact grown up. However, as soon as my mother and stepfather were married in July of 1946 -- I was now ten -- the three of us moved into a very tiny down-at-the-heels dwelling in a dilapidated court in the same general area where I had grown up near Mills College. Another life was beginning for all of us, and the deep bond that had grown up between my mother and me during the war years was sundered at this time by this strange intruder, my stepfather, who was so unlike all the other members of my own family.

Below is a photograph of my mother and Ray shortly after they were married, which was taken in the postage stamp of a backyard of the house we were all living in at the time. Look closely at this photograph. Does my mother seem at ease to you? 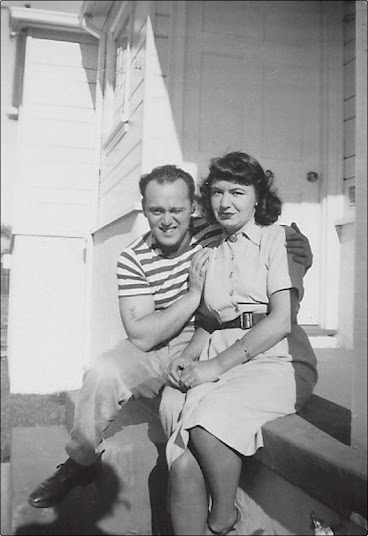 Meanwhile, I could see that something was happening to my mother. She had gradually become more withdrawn and seemingly troubled. Of course, my suspicions immediately centered on my stepfather, and eventually, when he was out of the house, my mother started confiding in me again, telling me of her unhappiness with him. Although she was not specific, she intimated that her sex life with Ray was deeply unsatisfying. She just wasn’t attracted to him; indeed, in some ways, she seemed repelled, even frightened, by his physical ardor. She had made a mistake in marrying him, she said, but she could see no way out now. From what my mother indicated to me, however, although she was always oblique about this too, I knew she had -- even then -- other suitors and that one of them, a furrier, wanted her to leave her marriage so that they could be together. Naturally, by this time, I encouraged my mother to do exactly that. I wasn’t any more happy than she was in this new family constellation, and I urged her to find a way to break free. But she never had the courage to do it, and this is when I began to lose respect for my mother. She would only complain, but she would never take any action. She was defeated, a captive in a marriage that she thought would save her, but had only confined her to a prison run by a benevolent but completely controlling warden. It was at that point that my mother started her descent into mental illness, which was her only escape.

Something, then, was beginning to happen to my mother, although at that time, when I was completing high school and beginning my college studies, I was too preoccupied with my own life to pay that much attention to that of my mother. I had also moved away to Berkeley during those years, so I also did not have as much contact with my mother as before. She was left alone now with her husband, another controlling man in her life, as her father had been, but from Ray there would be no way out.

I knew of course that my mother suffered from anxiety, that she was riddled by unnamed and untamable fears and was deeply unhappy in her marriage. And, naturally, all this depressed her, so that she was tempted to withdraw from life as much as possible. Stuck at home and unable to drive, she seemed to have no friends at all. Mary was her only companion and confidant, even more important now than ever since my relationship with her was no longer as close and intimate as it had been.

However, when my parents moved out to Berkeley themselves -- my stepfather had arranged to manage the apartment complex where they lived -- I was at least able to visit my mother frequently. We often played Scrabble together -- as a reader she was good with words. A longtime subscriber to The New Yorker, she introduced me to the magazine when I was thirteen (I have been reading it every since). And she did have a sly sense of humor. I think at that time, I was just about her only distraction from the tedium and stress of her marriage.

My mother never was interested to talk to a therapist, and I don’t think Ray would have countenanced it, anyway. Instead, I recall that she frequently saw a Dr. Goodman about her ills, and it was because of him that she began to take Valium daily, something I never learned until years afterward. At that time, Valium was a frequently prescribed tranquillizer, and it was not then known that it could become addictive and, in some cases, could even lead to a Valium-induced psychosis.

That was the fate that was to befall my mother, but by degrees over the ensuing years.

By now, I was already a young professor at the University of Connecticut, so the only contact I had with my mother was through an occasional letter (and birthday card) and during my visits back to California. At first, I didn’t notice anything particularly alarming about my mother during my visits. There was one thing, however, that struck me. As I’ve said, she was not a demonstrative woman, but I noticed on these occasions that as soon as she saw me, she would invariably tear up.

After a while, though, her behavior had become distinctly peculiar and a source of some concern. At that time, she and Ray were living in a condo in a gated community in San Leandro, but for some reason they never wanted me to visit them there. They would insist that we meet at Mary and George’s house in Oakland. That was fine with me because I particularly enjoyed spending time with Mary, long my favorite relative as I was her favorite nephew. But a typical visit with my parents would take this form: After about fifteen minutes, my mother would become agitated and say something like, “Ray, we really have to go now,” and so they would with a hurried goodbye. It left us all puzzled and perplexed, figuratively scratching our heads. Well, that was my mother, that’s just how she was these days, it seemed. But the signs were there and some years later I was to learn the devastating secret about why my parents never wanted me to visit them at their home.

So in those years, I was never able to meet with my mother privately, but, as I said, she would at least occasionally write to me. Sometimes it was to relate a violent quarrel that she had had with Ray who was choleric, impulsive, and was able easily to intimidate my mother and cause her to cower. He was never physically abusive toward her, but he ruled her with an iron will. But many of her letters were about money matters, particularly after Ray, in a characteristically rash episode, had taken all of their money (including some that had belonged to Ro, and without her permission) and invested it in a “get rich scheme” that predictably had gone bust, with the result that they were suddenly far worse off financially than ever. (George to the rescue again.)

This had created both a family and financial crisis, and my mother wrote me several anguished letters about it, and her seething anger at Ray for what he had done -- not only acting foolishly without consulting her, but also because he had committed an act of theft. She was understandably bitter.

After that, she often wrote me about certain bank accounts of hers (apparently they had been replenished to a degree at Mary’s insistence through George’s grudging largesse) that she wanted me to be sure to know about in case she died. She had always been a secretive woman, and she was determined to keep these accounts hidden from Ray. He would never learn about them.

But, meanwhile, with my mother’s continuing use of Valium, her behavior was becoming more erratic, as Ray himself told me once when he had come to the airport to pick me up. This in itself was unusual, as I had spent very little time alone with him, nor did I care to, during my years away in Connecticut. But this time he wanted to talk to me; he was also beginning to be concerned about Ro’s behavior. I knew he wouldn’t want her to see a therapist; he seemed to think only her doctor and drugs could help her. But he confessed that he was at a loss as to what to do, and I doubted that he would be open to any advice that I might offer. I actually think he mainly wanted to talk to me just to unburden himself.

What made this such a memorable encounter, however, was when he told me something I had never known. He said, pretty much in these words, as I recall, “You know, Ken, in all these years your mother has never once told me that she loved me, never once!” How I then felt for my stepfather who, for all his flaws and failings, did so deeply love my mother, despite everything. How he must have suffered from this knowledge, and how much courage it must have taken for him to disclose this to me. Still, afterward, I could not help reflecting that my mother, in her two marriages, had never loved either husband; she had passed her life in two loveless unfulfilling marriages, and now seemed to be spiraling out of control in a vertiginous descent into increasing despair and mental disintegration.

Unfortunately, the worst – far worse – was still to come.

This is the second part of a three-part blog about my mother. The next episode will be posted on Wednesday, July 14th.